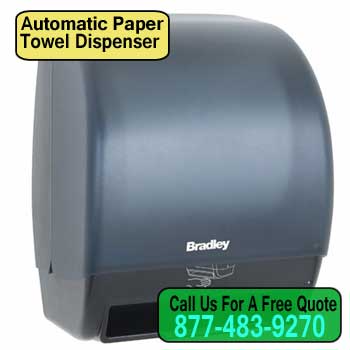 Paper towel dispensers continue to rank among some of the most popular restroom accessories we sell.  Their popularity results from a number of factors.  After replacing cloth rolling towels, they were the only sanitary hand drying option in public restrooms for many decades.  Almost everyone has used paper towels since childhood and is familiar with their use.  In spite of the growing popularity of electric hand dryers, many people prefer to simply dry their hands manually.  While paper towels have to be refilled, their cost is marginal.  More decorative models are built to last, making them unlikely to break.  Cheaper models are easy to replace. 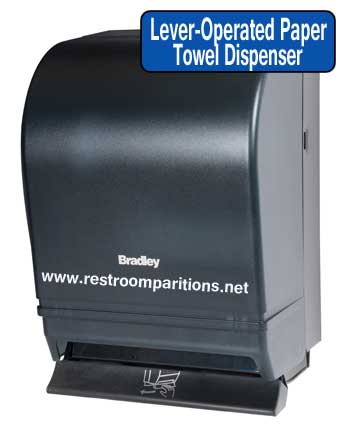 Some of you may remember how some public restrooms had cloth roll for hand drying in the 60s and 70s.  As paper towel dispensers became more common, some public restrooms advertised them as a much more sanitary alternative.  This was more than advertising…it was fact.   A recent scientific study found that paper towels do a far better job of removing bacteria than electric hand dryers.    A series of tests confirmed that when a person manually dries her or his hands with a paper towel, a majority of the bacteria on the hands transfers to the paper.  Electric dryers were found to be the least effective in removing bacteria from the hands.  Decades after they replaced cloth hand towels, paper towels are still the most sanitary hand drying tools on the market. 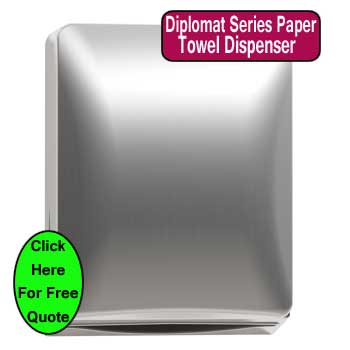 We have to also consider user preference when choosing between hand dryers and
paper towels.  Some people simply do not want to let a machine dry their hands.  They prefer to dry their own hands manually   Many users also feel that in spite of the improvements in hand dryer technology, paper towels allow them to dry their hands more effectively.  Others simply like the control that something manual and simple offers them.  Due to these perceptions– which govern user choice regardless of factuality –many larger public restrooms even now have not completely replaced paper towel dispensers.  You will see them in many places mounted side-by-side with electric dryers.

Paper towel dispensers also represent a lower cost than electric hand dryers.  Even
the most durable and decorative models cost significantly less than electric equivalents.  While paper towels must be continually refilled, the cost of replacements is only a minor expense.  Stainless steel and recessed dispensers are exceptionally durable and very difficult to break.  Electric dryers run on motors, and if the motor fails, the unit is unusable.  Paper towel dispensers rarely fail unless they are deliberately vandalized, and this is very hard to do with recessed models that fit snugly into the wall.  In the event than a less expensive unit is chosen and subsequently broken, the replacement costs are much lower than those of electric hand drying units, and the installation is easier because it requires no wiring.

If you want to install something simple that users are not only accustomed to, but many also prefer, then we recommend that you purchase paper towel dispensers even if you also plan to install electric hand dryers.  Not only are they preferred by many users, but they are also easier to install and maintain, and research has indicated they offer the best protection against bacterial infection.